Home > About > History and Architecture

All Saints Margaret Street is a Grade I listed Victorian church in Fitzrovia, near Oxford Street, London. It is regarded as one of the foremost examples of High Victorian Gothic architecture in Britain. The church is a living house of prayer and is cherished by all who worship here for its sacred atmosphere and magnificent heritage.

It was designed in 1850 by William Butterfield, an architect strongly associated with Gothic revival church building and the Oxford Movement. Completed in 1859, the red brick church was built around a small courtyard with an adjoining vicarage and a choir school. The interior is noted for its rich decoration and beautiful fittings – a true “hidden gem” in the streets of central London.

The church owes it origins to the Cambridge Camden Society (from 1845, the Ecclesiological Society) founded in 1839 with the aim of reviving historically authentic Anglican worship through architecture. Its influence was substantial, and by 1843 its 700 members included the Archbishop of Canterbury. Its monthly magazine, The Ecclesiologist, reviewed new churches and assessed their architectural and liturgical significance.

In 1841, the society announced a plan to build a ‘Model Church on a large and splendid scale’ which would embody important tenets of the Society:

Above all the church must be built so that the ‘Rubricks and Canons of the Church of England may be consistently observed, and the Sacraments rubrically and decently administered’.

The project was supervised, and largely sponsored on behalf of the society, by Alexander Beresford-Hope, later MP and son-in-law of the Marquis of Salisbury, who chose the architect William Butterfield (1814-1900) to undertake the project (though the two were often to disagree about important aspects of the work).

Butterfield designed nearly 100 churches and related buildings during his long career, including the chapels of Balliol College and Keble College, Oxford, and built in a highly personal form of gothic revival. All Saints Margaret Street remains his masterpiece.

A chapel had stood on the site – midway along Margaret Street, which runs parallel to the eastern half of Oxford Street – since the 1760s, which from 1839 had been used by a Tractarian congregation, and who agreed that the Ecclesiological Society’s model church could be built there. The site was small – just 100 feet square for a church, choir school and clergy house.

All Saints was built of brick. The Ecclesiologists had originally extolled the virtues of rough stone walls, but were converted by the brick churches of Italy and North Germany. The pink brick chosen by Butterfield was actually more expensive than stone. The bold chequered patterning is most likely to have been based on English East Anglian tradition.

We rejoice that Butterfield’s masterpiece is still a living building and the place of worship for our community of faith. All Saints’ church speaks powerfully of God’s presence in the midst of the hustle and bustle of the West End of London: it proclaims the centrality of worship and prayer to what it means to be human in right relation with God; it reminds the Church of England of the catholicity of its calling; and it lives out a rich liturgical heritage rooted in the truth of the incarnation. 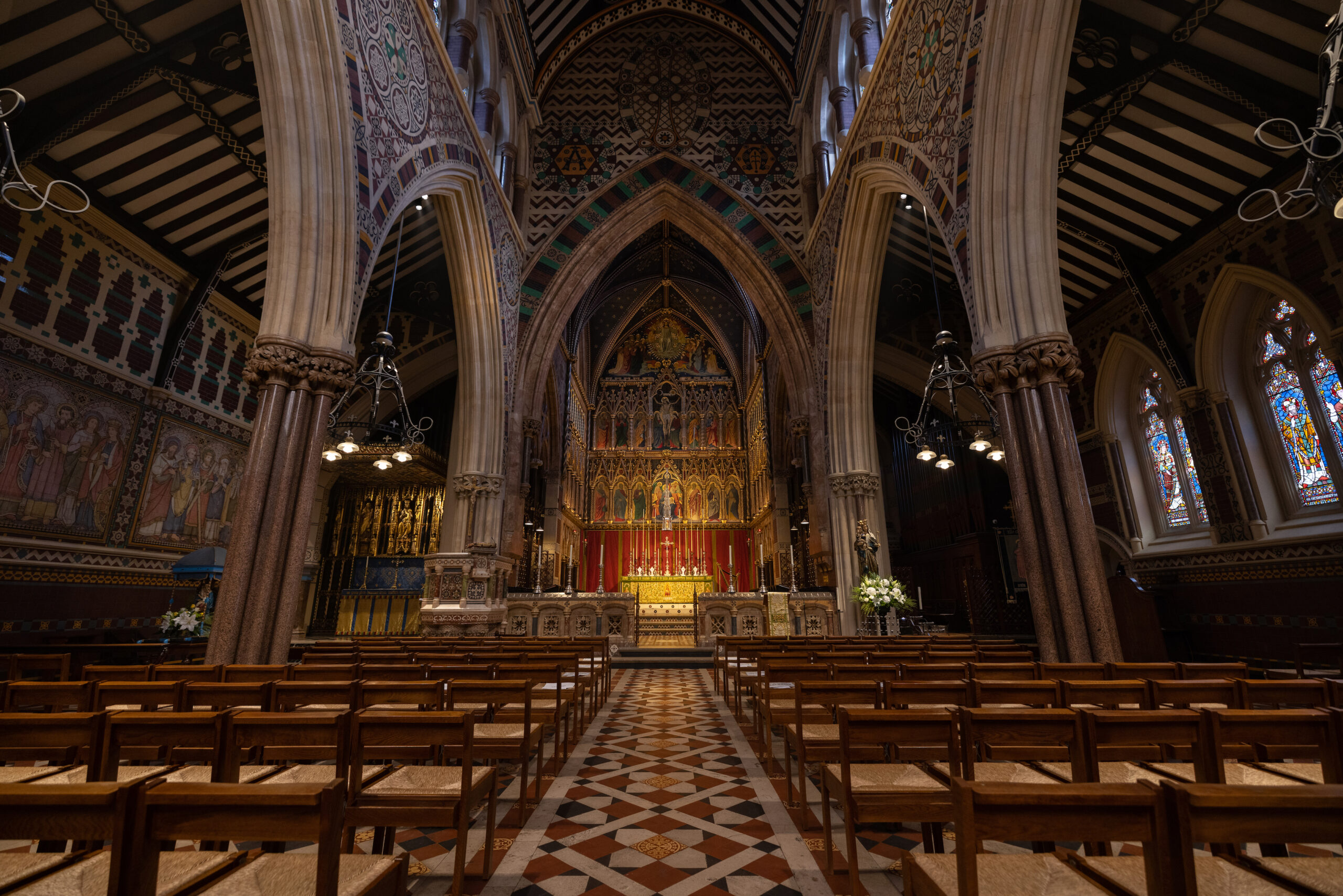