Home > About > The Church Interior

Explore All Saints Margaret Street with this interactive tour of the church.

Click a hotspot to reveal information
Explore with 360º views

Tap a dot to see info 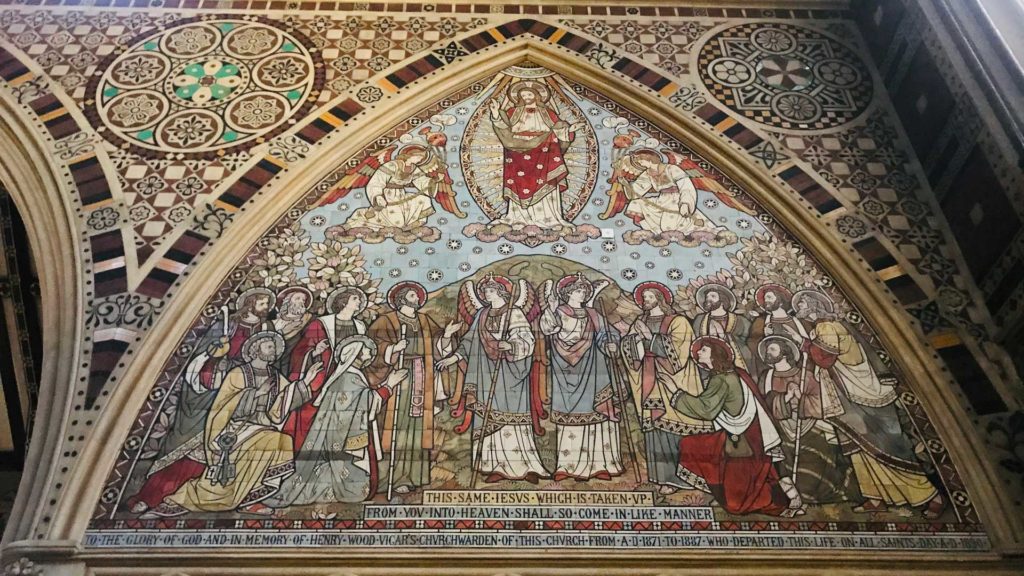 On the north wall of the tower is the tile frieze depicting the Ascension of Christ with a verse from Acts 1:11: "This same Jesus, which is taken up from you into heaven, shall so come in like manner". It completes the collection of tiles designed by Butterfield whose narrative begins on the opposite wall with the prophets foretelling the Incarnation. Completed in 1891, this was the last section of tilework to be added by Butterfield. 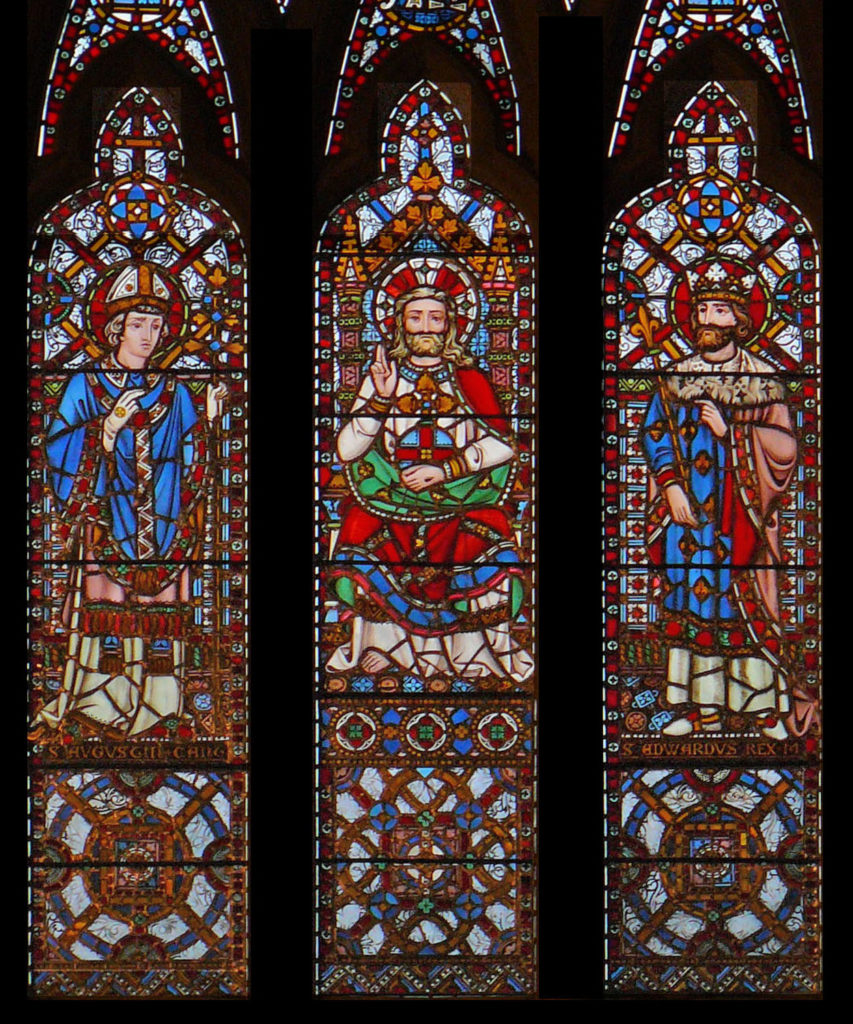 Tucked away at the end of the south aisle behind the vestry gates is a window depicting Christ in Majesty flanked by St Augustine and St Edward the Martyr.  It was designed by Michael O’Conno and executed by Alexander Gibbs, c. 1853. 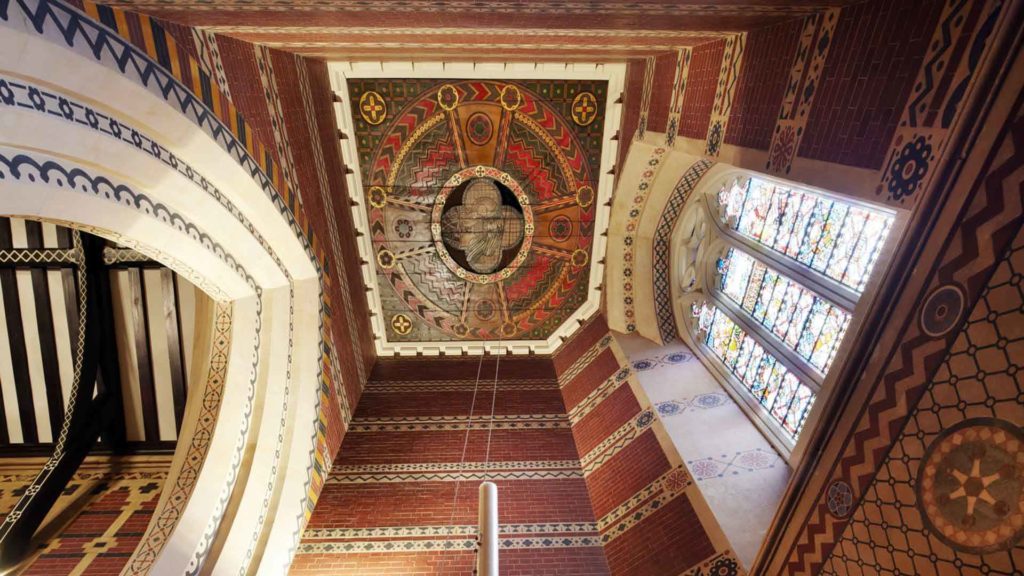 The stained-glass window in the baptistery is The Adoration of the Lamb, designed c. 1857 by William Butterfield and executed by Arthur O'Connor. It depicts the Lamb of God flanked by worshippers. Below are the emblems of the Four Evangelists: an angel (Matthew), a winged lion (Mark), a winged bull (Luke) and an eagle (John).

Originally this window was located at the east end of the church but was boarded up when the organ was enlarged in 1910. In 1996 it was uncovered and relocated in the baptistery to fill the space once occupied by a window by Gérente that had been blown out in WWII. Some small portions had to be removed from the top and bottom to fit it into the new frame.

The ceiling is decorated with the Pelican in her Piety, a symbol of Christ shedding his blood. 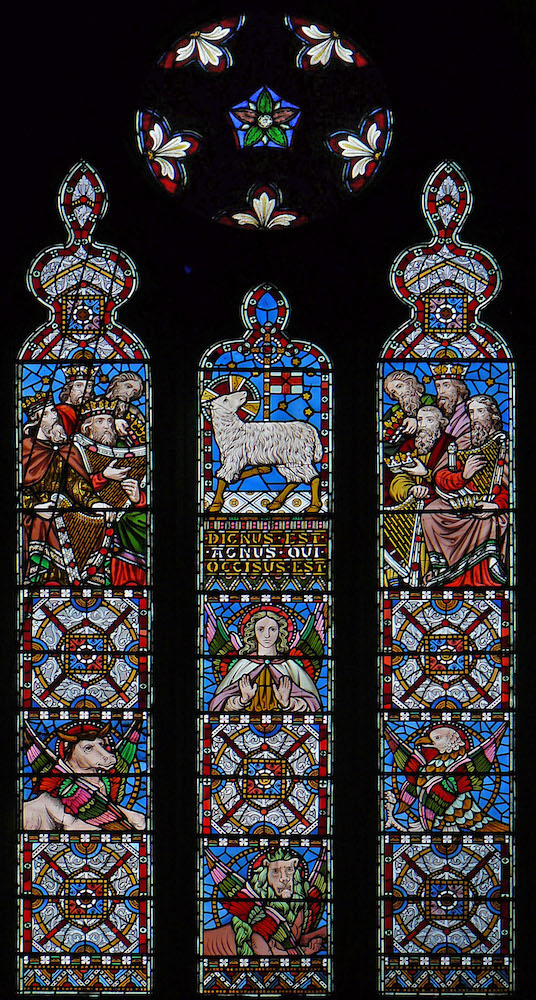 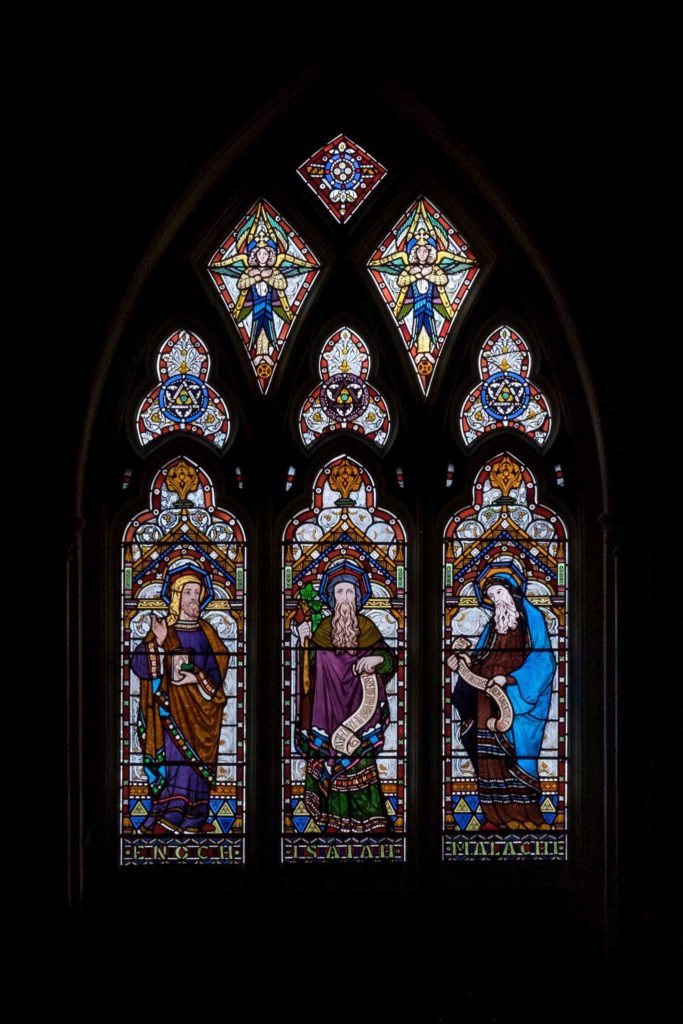 The window at the end of the north aisle was designed by Henri Gerente (c.1853-59). Most of Gerente's windows in All Saints were later replaced by Butterfield and this is now his only surviving work here. It depicts the Old Testament prophets Enoch, Isiah and Malachi. 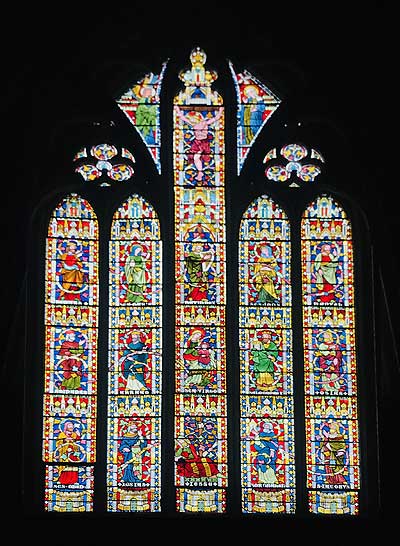 The great stained-glass window of 1877 at the west end was designed by Alexander Gibbs. It depicts the Tree of Jesse, inspired by the 14th-century Jesse Tree window at Wells Cathedral in Somerset. It replaced an earlier 1858 window designed by Alfred Gerente.

Below this is an 1899 tile panel designed by Butterfield and painted by Alexander Gibbs that depicts three Old Testament scenes: Moses lifting up the serpent (which symbolises the Crucifixion); Abraham offering his only son Isaac (as God gave his Son for our sins); and Melchizedek, priest of God. 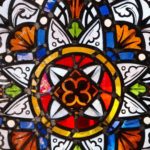 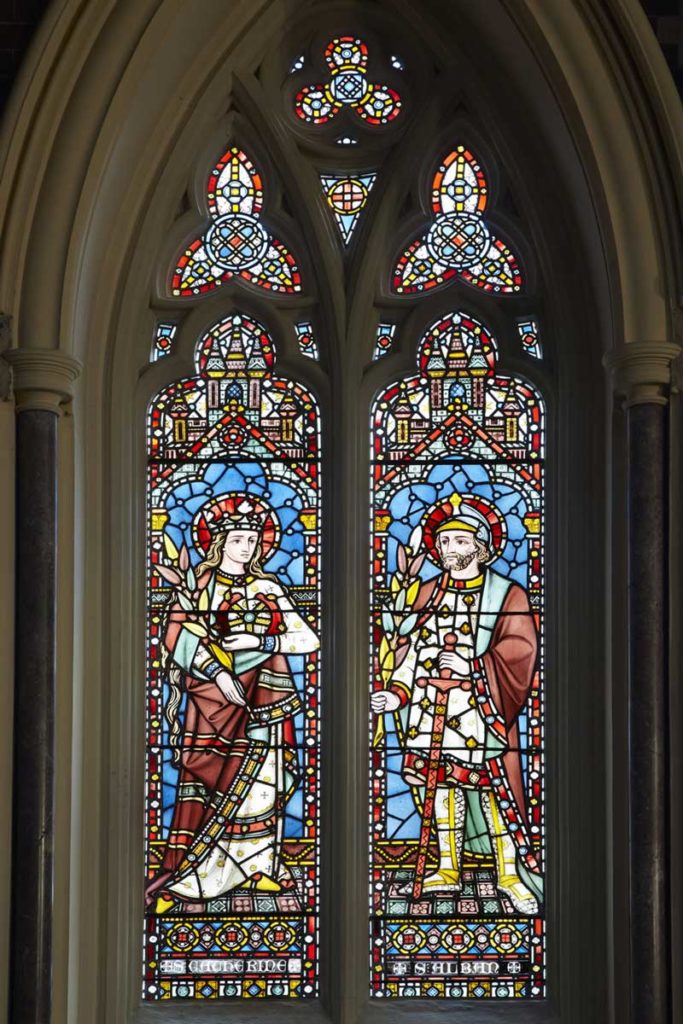 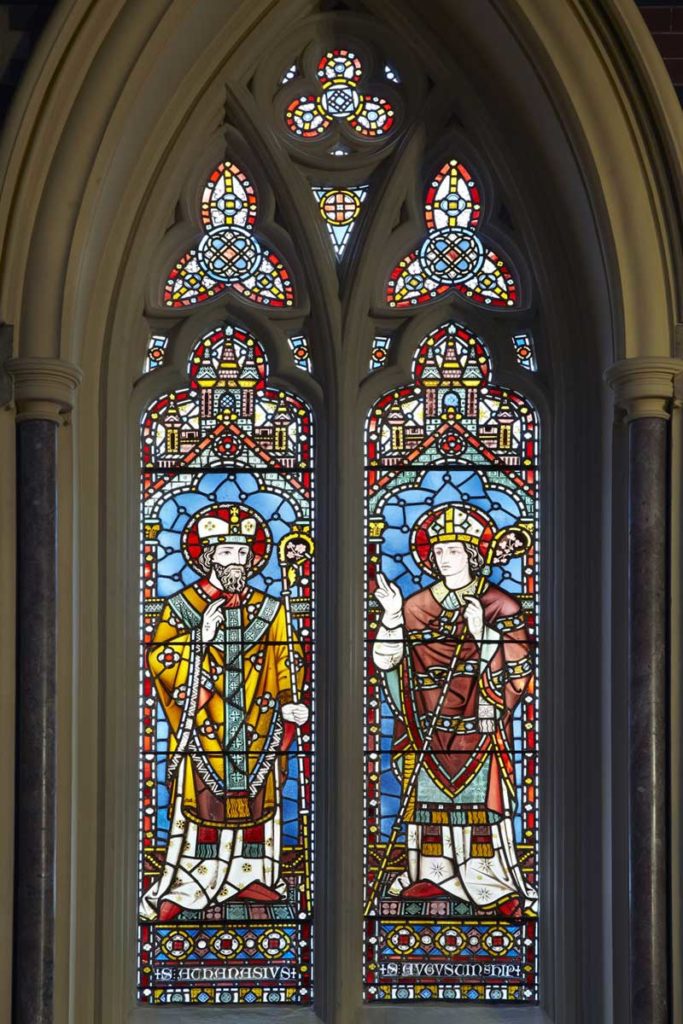 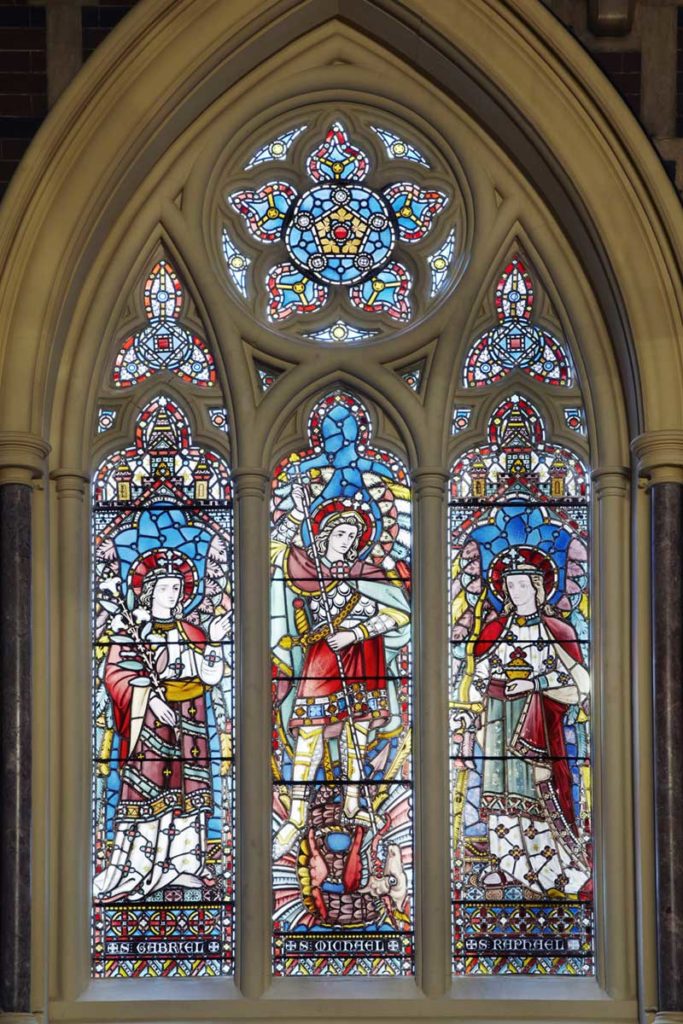 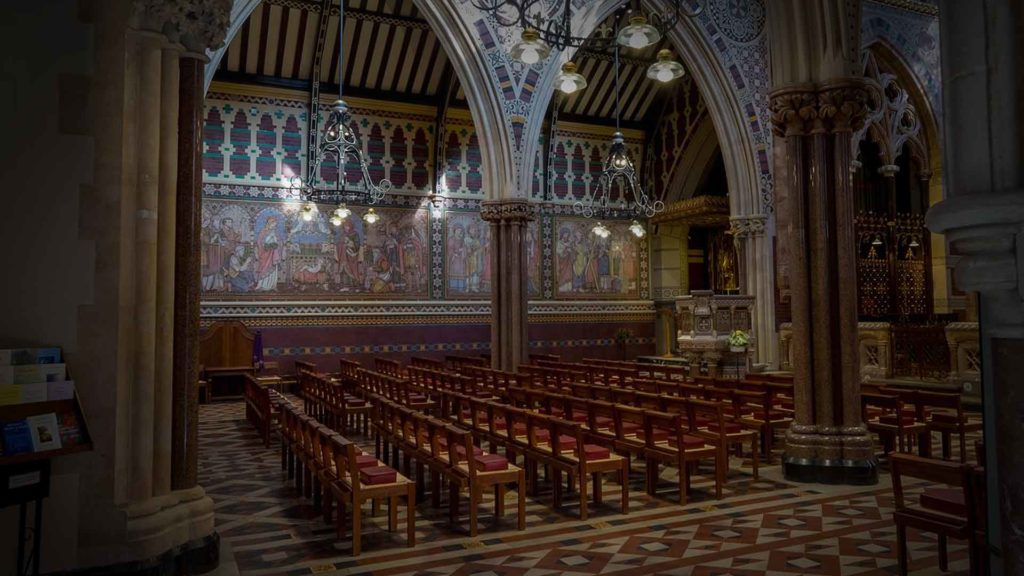 On entering the church, one is met by a reverential gloom, invariably infused by drifting clouds of incense. As one’s eyes become accustomed to the subdued light, a kaleidoscope of coloured tiles, brick, painting and gilding emerges. On a sunny day, shards of light cut across the chancel, spot-lighting decoration on its walls, and creating a distinction between this area of the church and the darker recesses of the nave. 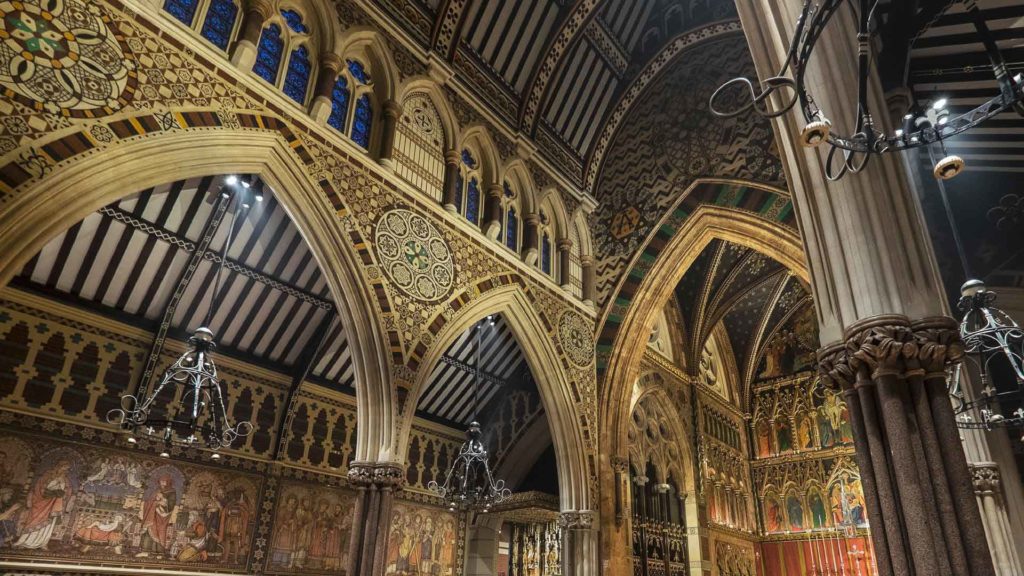 The designs that adorn the walls and pillars owe much to Ruskin who, in The Seven Lamps of Architecture (1849), advocated the use of chequers, zig-zags, stripes and geometrical colour mosaic. Matthew Digby Wyatt’s Specimens of Geometrical Mosaic of the Middle Ages may also have influenced some of the detailing. However, both of these favoured stone and marble, rather than tile, making the interior patterning of All Saints very much Butterfield’s own work. Ruskin, in fact, did not ‘altogether like the arrangements of colour in the brickwork.’ Butterfield’s tiled floor, made by Minton, is deep red with black checks and a white stone diaper, while the north and south aisles have a triangular variation on this pattern. The roof, now repainted, was originally in chocolate and white with blue detailing. 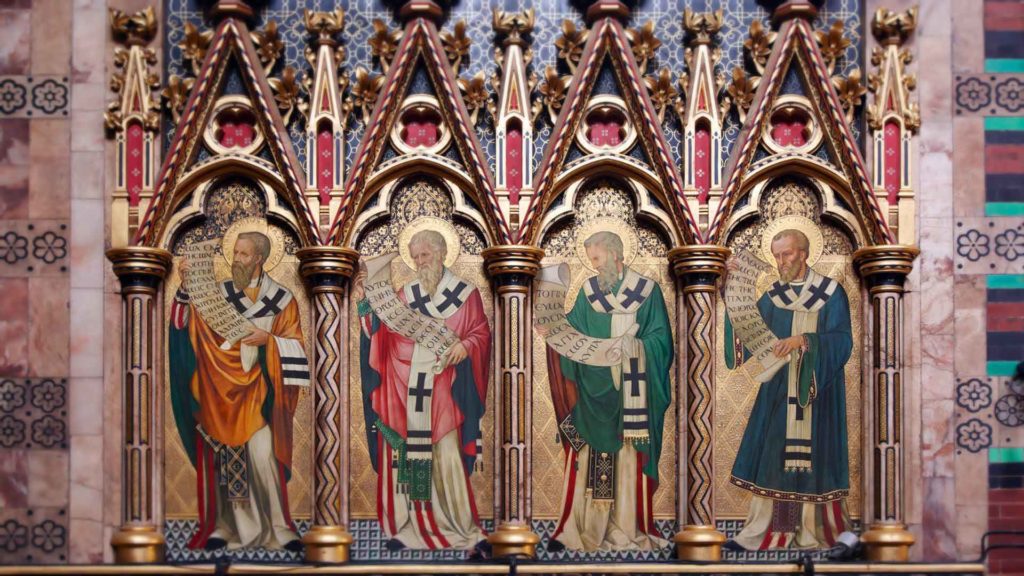 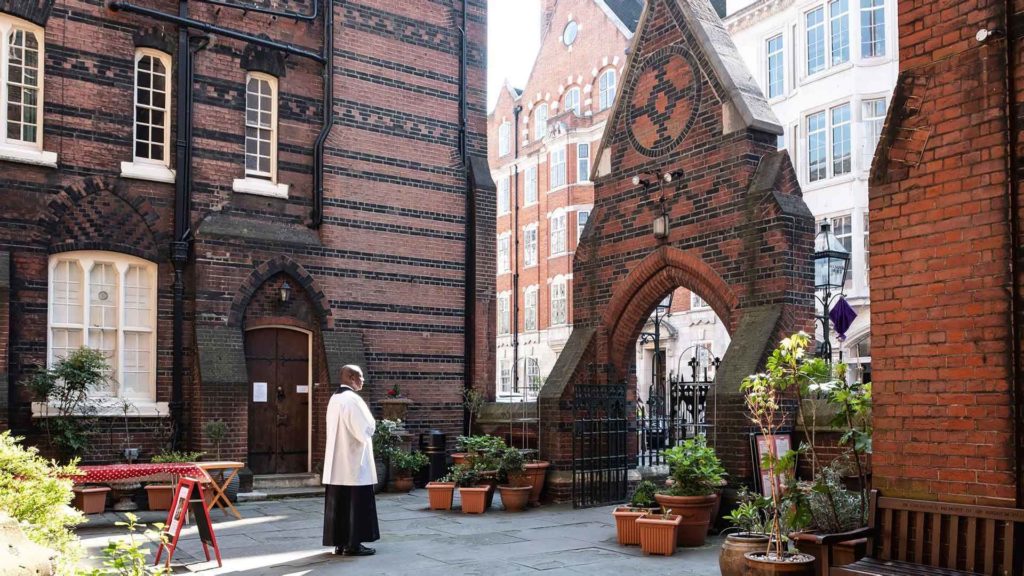 The All Saints site is entered through iron gates into a courtyard (used for post-service refreshments almost year-round, All Saints’ congregation being hardy people). Immediately opposite is the great buttress with its relief carving of the Annunciation.

To the right stands the vicarage, while on the left stands the old choir school which now houses: 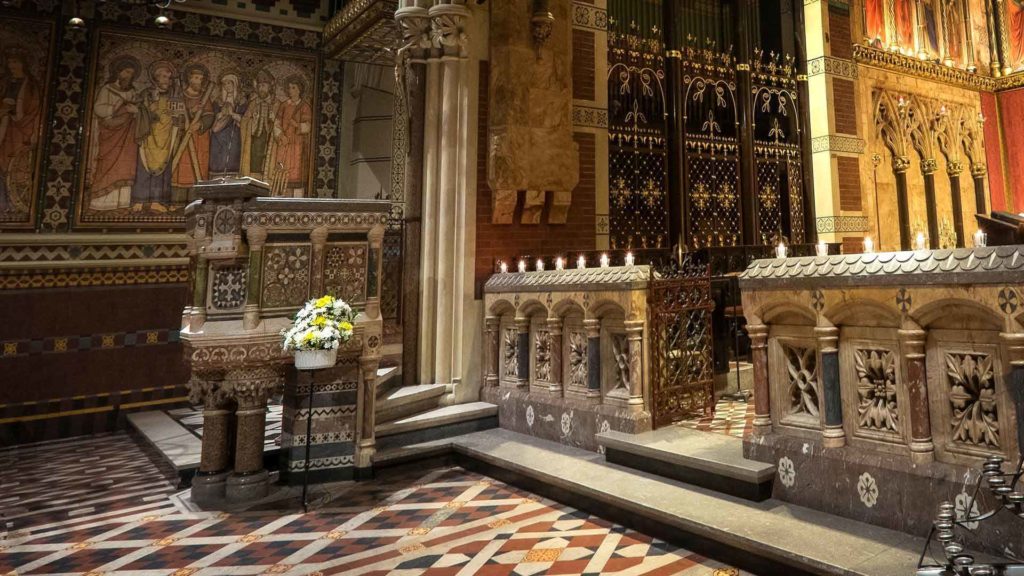 The pulpit, by Butterfield c.1858, manages to exude both a rugged solidity and a harmonious delicacy, the latter on account of the brilliantly coloured geometrical mosaics which adorn it, comprising Derbyshire fossil grey, red Languedoc, yellow Sienna and Irish green marbles. 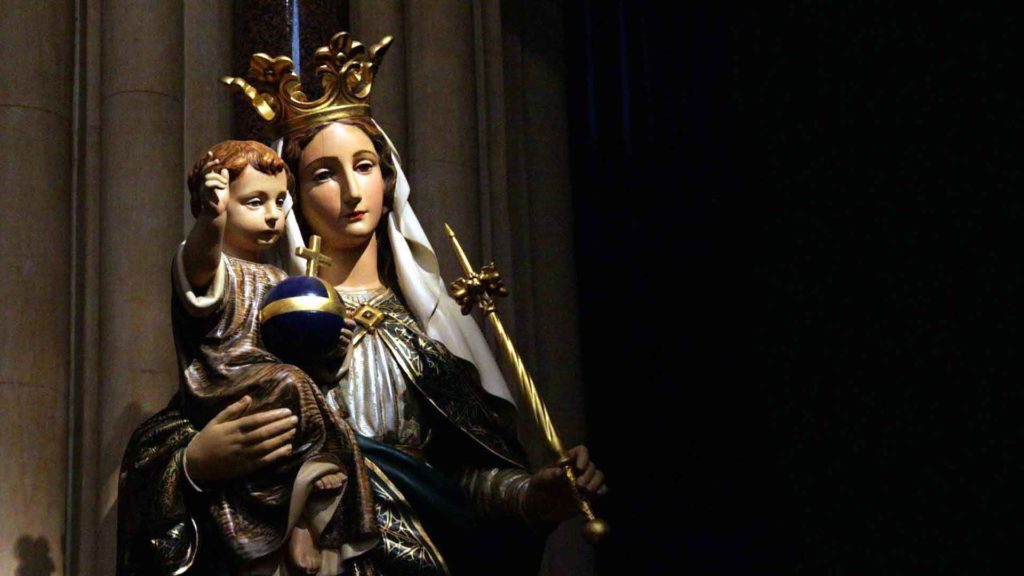 The majestic and serene statue of Our Lady with the Christ Child was carved in Bruges by Louis Grosse. It was painted and gilded in London, and presented to the church in 1924. It has recently been beautifully restored. 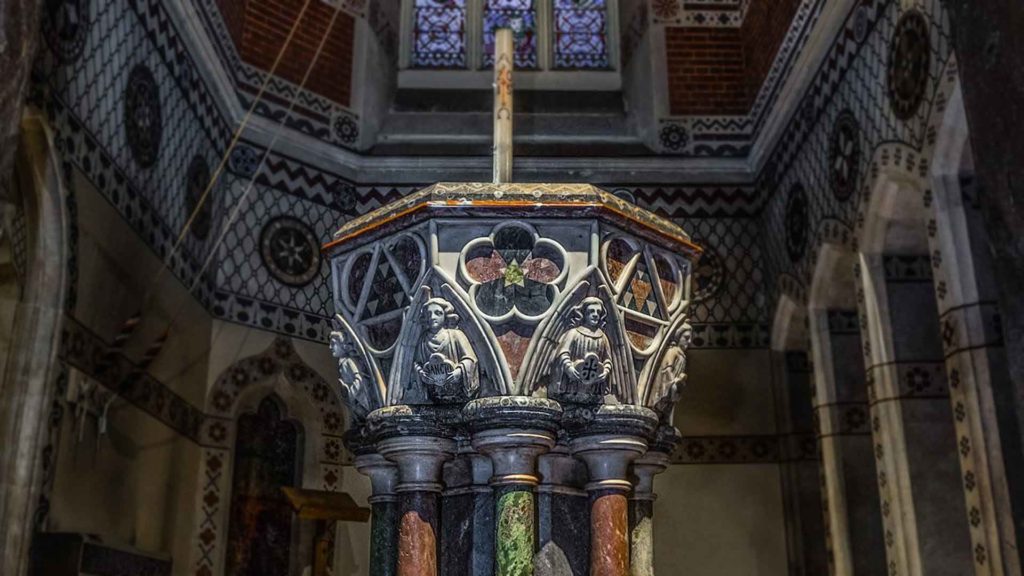 The baptistery, in the south-west corner, houses the font (1857-8), and the large paschal candlestick, a copy of one in the Certosa at Pavia, Italy.

In the ceiling resides 'the Pelican in its Piety', piercing her breast to feed her young - symbolic of the Fall and Redemption of man (the pelican was supposed to slay her rebellious offspring then revive them with her own blood). 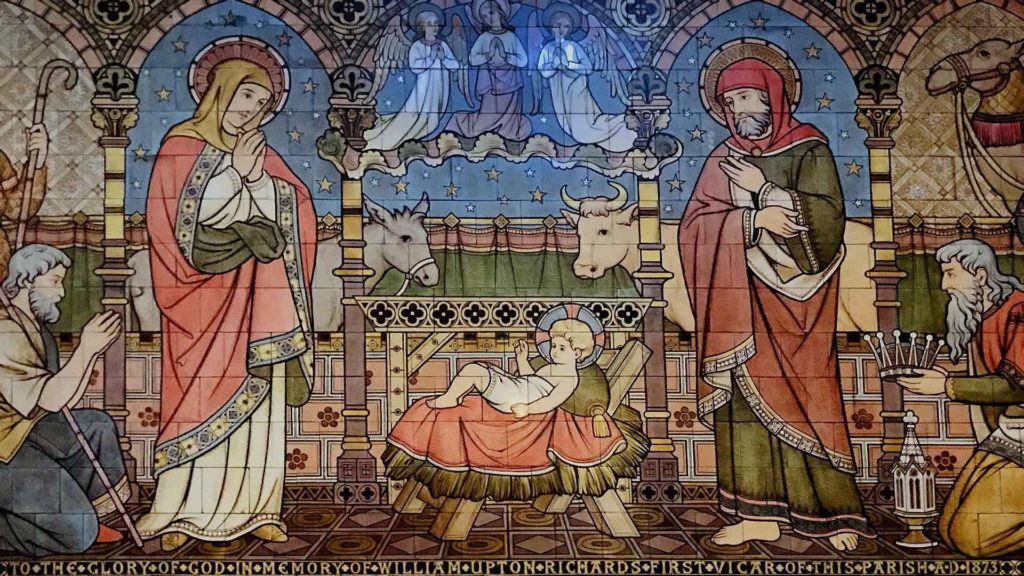 The vast tiled panels on the north wall were erected in 1873, at a cost of £1,100 in memory of Upton Richards, the first vicar. The tiles were designed by Butterfield to replace his original geometric patterns. They were painted by Alexander Gibbs and manufactured by Henry Poole and Sons, and the panels depict a variety of scenes from the Bible and the Early Church. 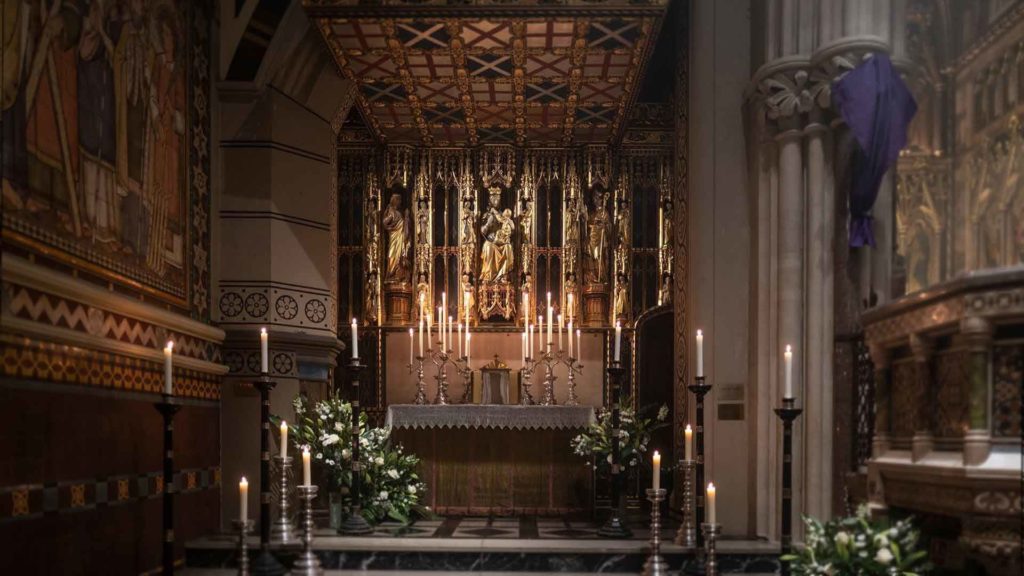 The Lady Chapel (1911), situated at the east-end of the north aisle, was designed by Sir Ninian Comper in late Gothic style, and was enlarged in 1971 by Ian Grant as a memorial to Kenneth Ross (1908-1970), eighth vicar of All Saints (1957-69). The reredos is of Caen stone and alabaster, and shows the Virgin and Child surrounded by angels and saints. It was restored by Peter Larkworthy in 1978-80. 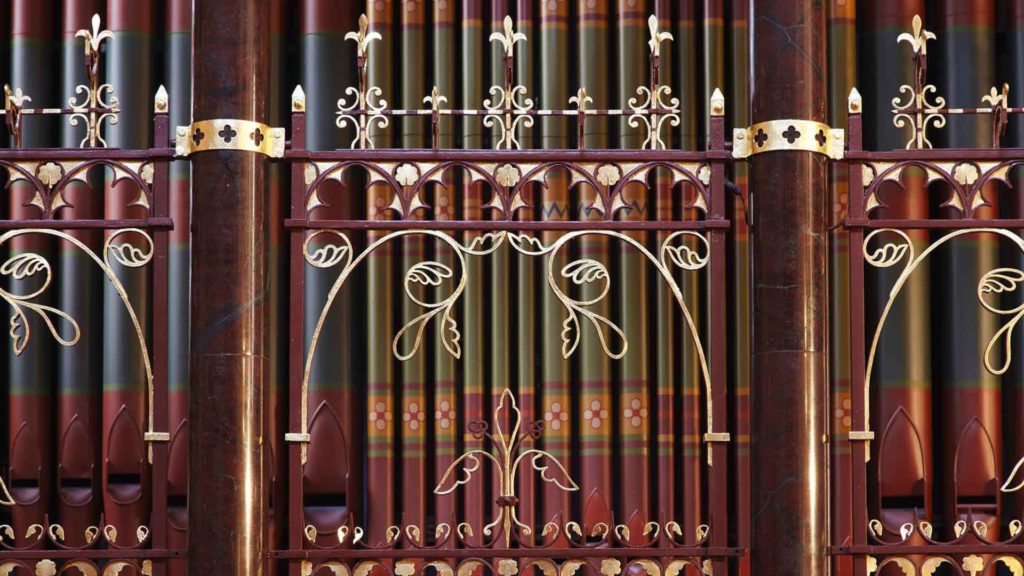 All Saints' organ is a four-manual Harrison and Harrison instrument with 66 speaking stops, built in 1910 to a specification drawn up by Walter Vale. 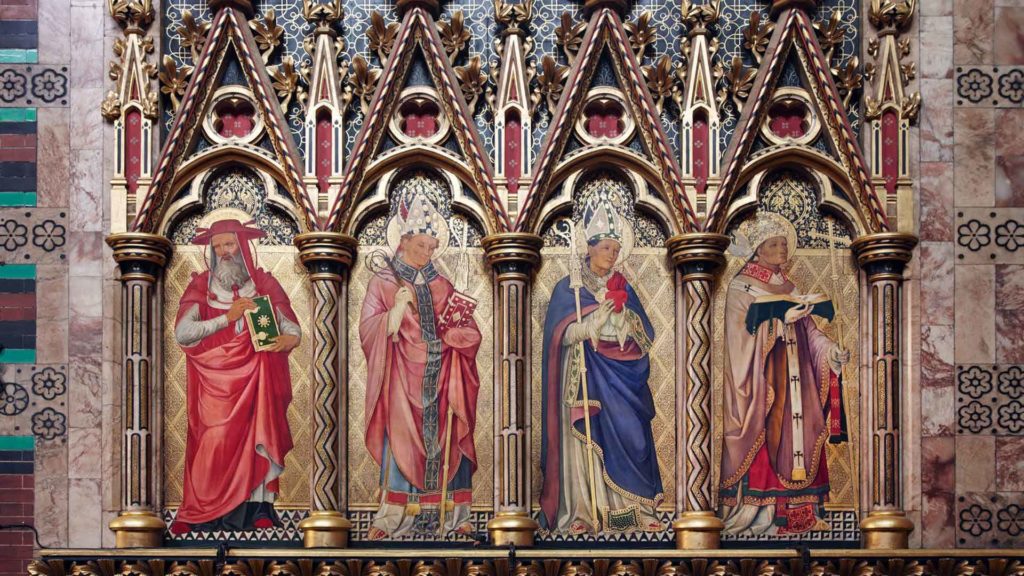 The north wall of the sanctuary depicts the four Doctors of the Latin Church (left to right): St. Jerome, St. Ambrose, St. Augustine and  St. Gregory the Great. Above them are images of male and female saints. 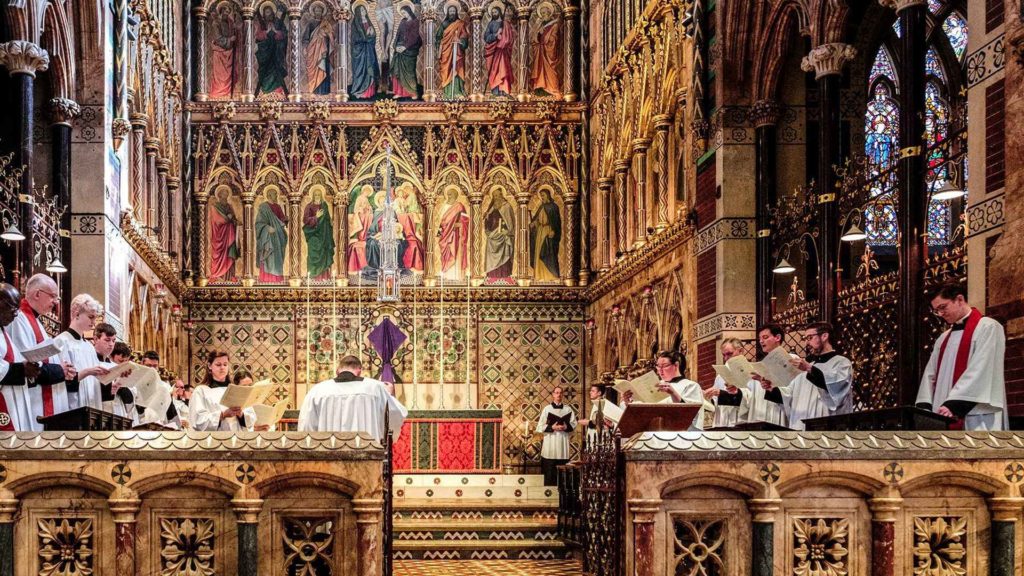 The chancel is entered through Butterfield-designed gilt iron and brass gates (made by Potter of South Molton Street) set into a low screen of alabaster and marble. The chancel's side arches are filled with rich decorated tracery modelled in alabaster and supported on red serpentine shafts. The floor is elaborately patterned in six colours. 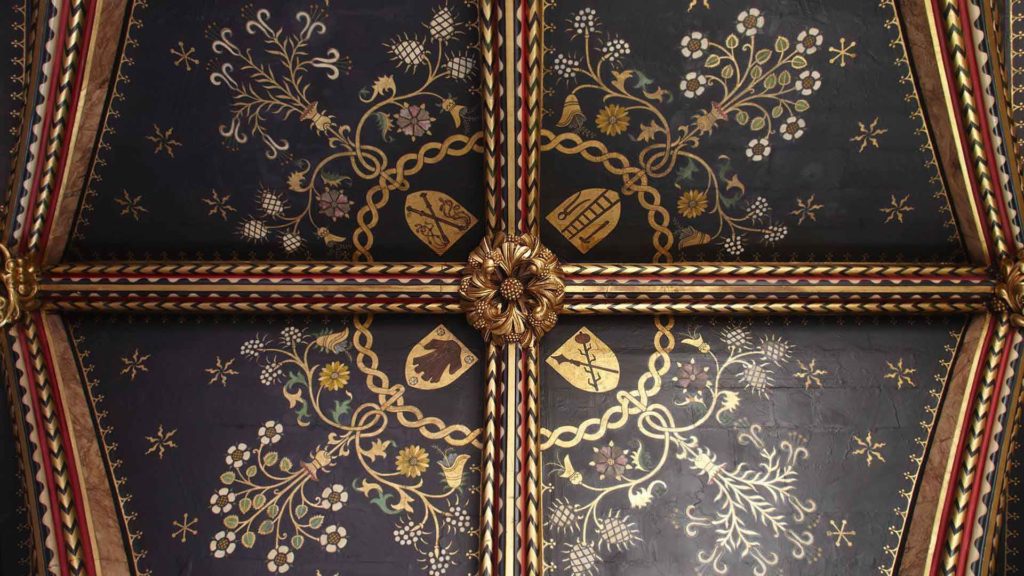 The vault, though influenced by 13th century English work, also shows influence of the upper church of St Francis of Assisi. The ribs spring from capitals and wall shafts based on examples at Warmington church in Northamptonshire. Butterfield had planned an unpainted vault, but Beresford-Hope favoured a painted ceiling, which was coloured by William Dyce at the same time as working on the reredos. It was repainted in 1909 by Comper, and in 1978-80 by Larkworthy. 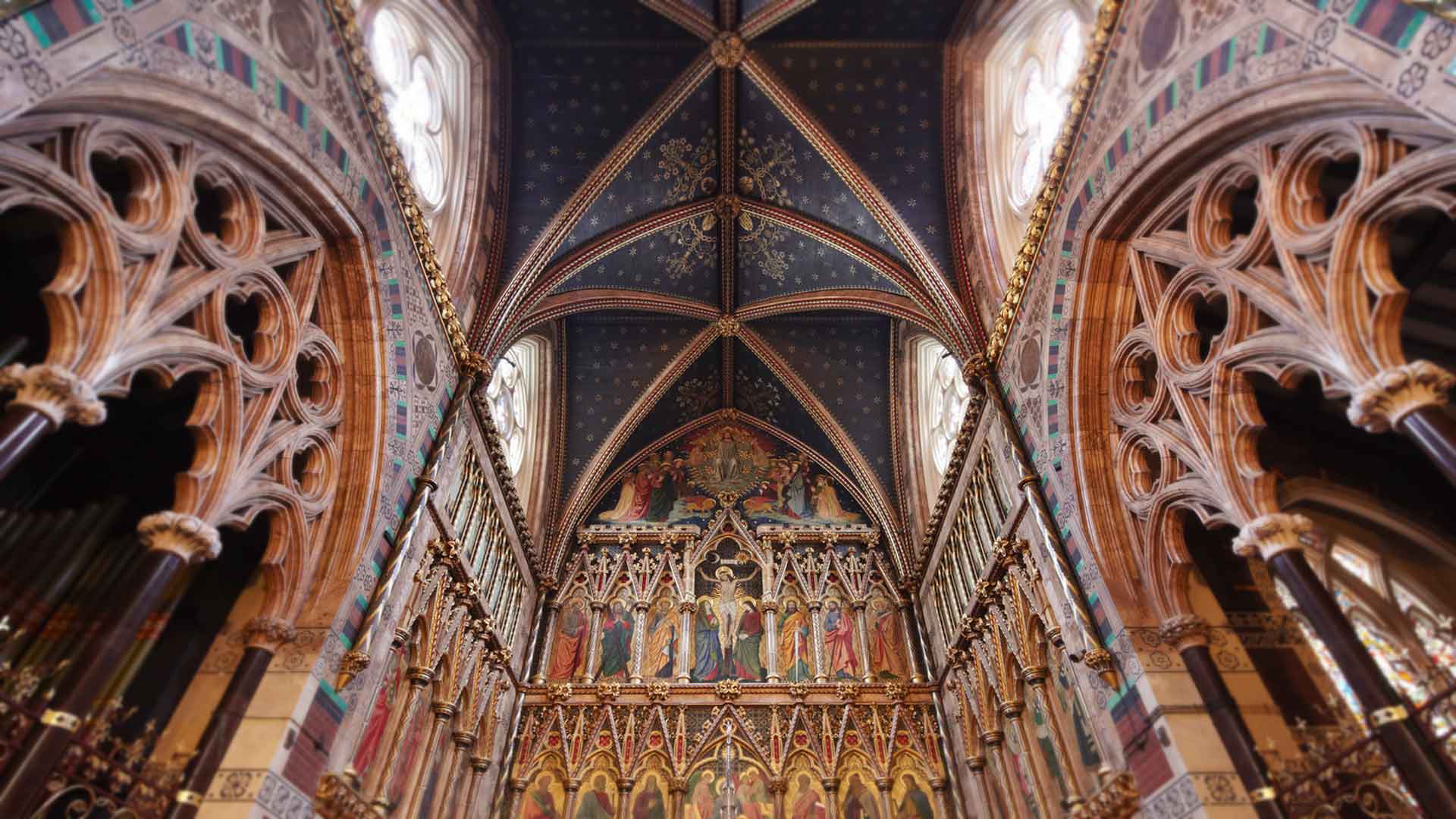 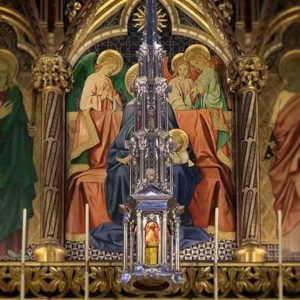 The immense reredos was completed by William Dyce in 1853-9, but suffering the effects of London air, was reproduced by Comper in 1909 on wooden panels in front of the original. Starting at the base with the depiction of Christ's earthly life, the eye is drawn upwards to Christ in glory, the free movement of the figures there contrasting with the more static figures beneath. The great silver pyx, designed by Ninan Comper, was given by the Duke of Newcastle in 1928 as a memorial to choristers killed in the First World War. 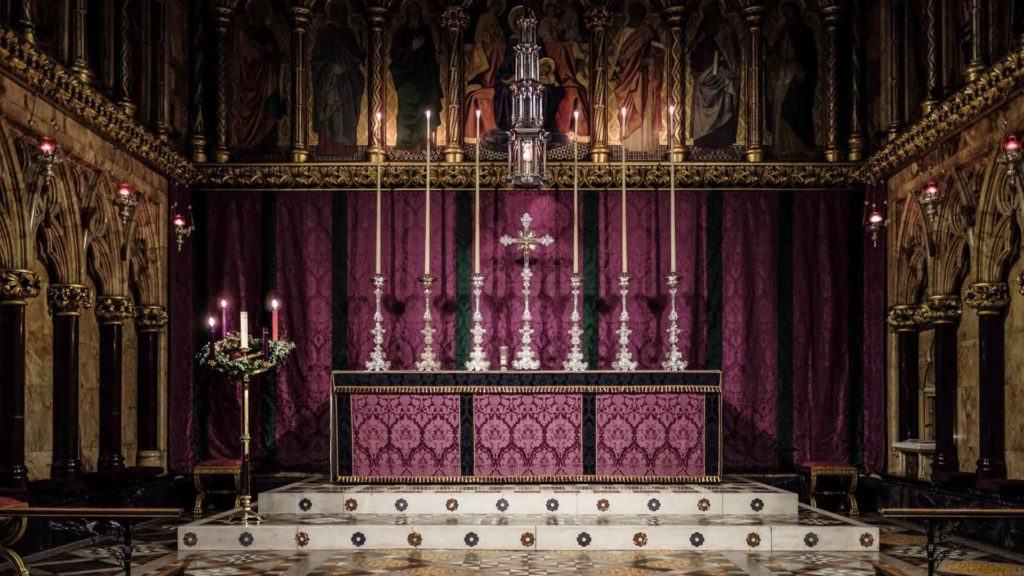 The chancel (or sanctuary), one of the most sumptuous and dramatic in London, occupies almost one-third of the length of the church - a reflection of the Tractarian requirement that the Sacraments be stressed above the Word. Its size, the grand and ornate reredos, the gradual enrichment of the decoration as one moves further east, the position of the windows casting shards of brilliant light (weather permitting) across the vast chamber, all aid in drawing one's attention towards this part of the church. Most of today's sanctuary furnishings were acquired in the early 20th century - Butterfield, suspicious of ritualism, had originally planned it to be simply furnished.

Tiling plays an important part in the decoration of the nave. The vast tiled panels on the north wall were painted by Alexander Gibbs and manufactured by Henry Poole and Sons. They are rich with Biblical symbolism and depict a variety of important figures from the Bible and the Early Church.

Click on the image to take a closer look: 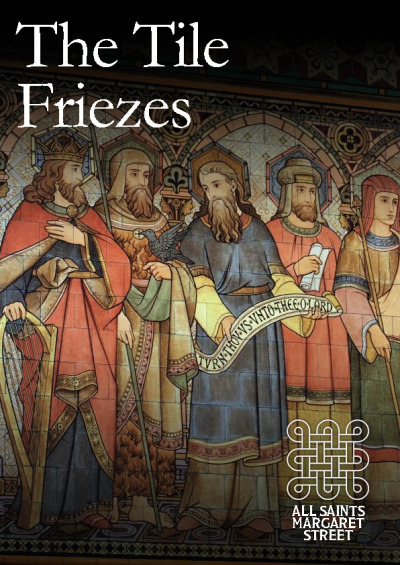