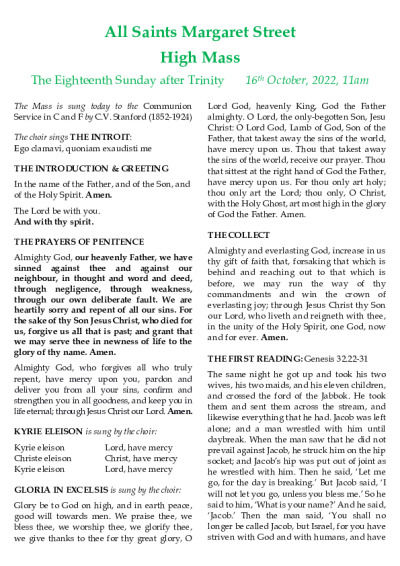 A group of parishioners from All Saints’ had a splendid outing on Saturday to the Royal Hospital Chelsea. This is the home of the famous “Chelsea Pensioners.” It was a wonderful opportunity to see behind the scenes of the Royal Hospital and to learn about the common life of the Pensioners and the history of the institution. It was such a privilege to see this fascinating place, which is not normally open to the public.

The Royal Hospital Chelsea was founded by Charles II as a place which could look after the soldiers of his armies who were in need of care either because of old age or infirmity brought about by the wars they had served in.

In part, he was inspired by Louis XIV’s foundation of Les Invalides in Paris. However, Parliament refused to pay for the project and it took much fundraising and financial ingenuity to ensure it was completed. The munificence of Charles’ successor James II, along with William and Mary, were crucial in ensuring the foundation was able to take in its first Pensioners and eventually expand.

In addition to being a place of charitable care and community, the Royal Hospital was also a bold statement by Charles II about the beauty, artistic attainment and architectural refinement that he wanted to characterise his reign after the dark years of benighted decline and religious division that the so-called “Commonwealth” had overseen.

Christopher Wren created an expansive array of beautiful buildings with, in addition to accommodation for the Pensioners, a light-filled Great Hall and gracious chapel. An enormous mural at the “high table” end of the hall is by Antonio Verrio, a Neapolitan painter who introduced baroque mural painting to England. It depicts Charles II with an cascade of putti holding back trompe-l’oeil swags which cascade down the wall, as allegorical figures standing for Justice and the Thames point to Charles as the embodiment of the virtuous monarch ruling by divine right.

The chapel was endowed with many splendid treasures by the Hospital’s royal founders. It has a remarkable set of communion in extraordinary condition donated by James II, parts of which were got out of the safe for us to admire. The apse is filled with a wonderful depiction of the Resurrection by the Venetian artist Sebastiano Ricci, showing Christ bursting form the tomb amongst a riot of figures, all pointing to the power of Christ’s victory over death. Gone is the mean spirit of Cromwellian national introversion; in its place is joyously celebrated England’s renewed connection to European artistic creativity and the power of the baroque to express a shared Christian culture.

I was very struck by the way in which all the Pensioners we met spoke so effusively and warmly about having been invited to take part in our procession of Our Lady for the feast of the Assumption. I assured them an invitation would definitely to extended to attend our celebrations next year and they said they looked forward to being with us. 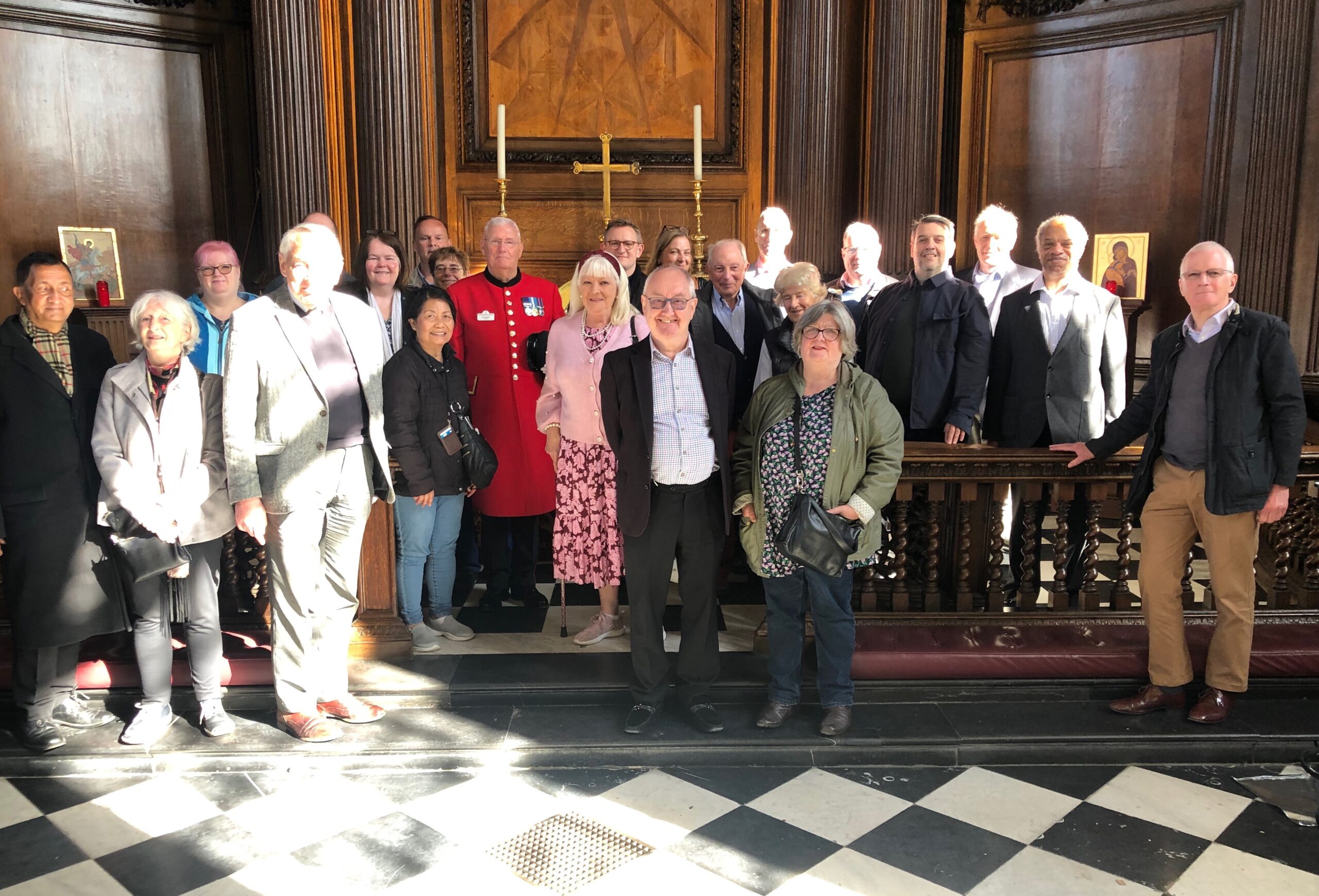 Thank you to our hosts for a wonderful visit to the Royal Hospital Chelsea.

Our autumn study day takes place next week on Thursday 20th October (10.00 am – 3.00 pm). Join us for a series of three lectures given through the day by Dr Gregory Tucker and Fr Peter, all focusing on the Transfiguration and ways in which we can interpret and live out its mystery in the world today. 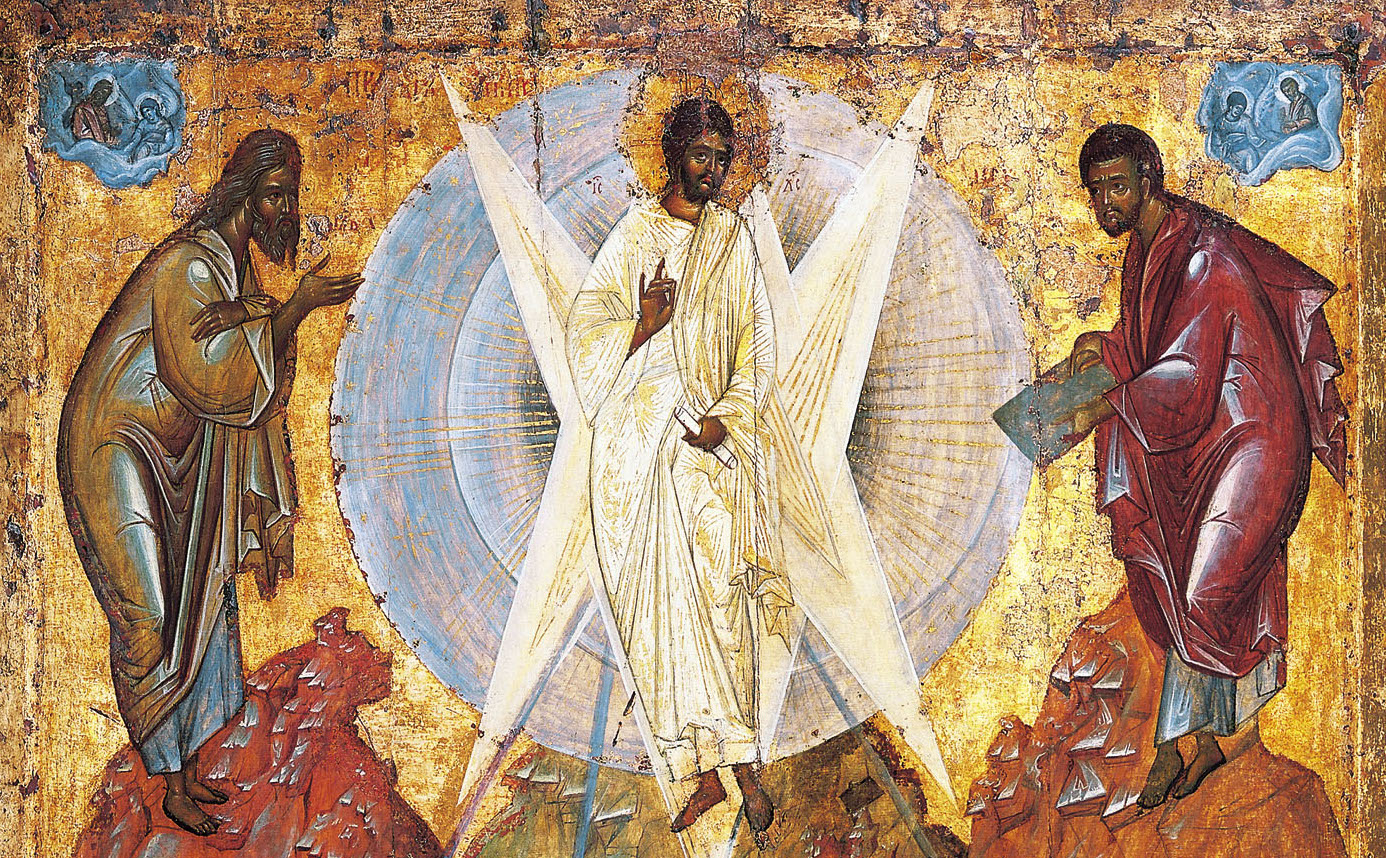 The treasures of Limburg

I have just returned from a brief visit to Limburg in the Netherlands. Limburg is a small finger of land that extends south from Holland and is bordered by Germany on one side and Belgium on the other. It has a fascinating Catholic culture quite distinct from that of the northern Netherlands.

Its principal city is Maastricht, a beautiful gem of a town, with two ancient basilicas dating back to the 5th century, closely associated with the city’s patron, St Servatius. He was an Armenian missionary who became Bishop of Tongeren and died in Maastricht. One basilica is the location of his tomb and the other the site of his first cathedral, possibly founded on the site of a temple of Jupiter.

The town’s art museum contains a remarkable collection of medieval statuary stemming from the flourishing culture of carving that thrived in the Maas Valley from the 13th-16th Centuries. Several outstanding rood corpuses are to be seen by the local virtuoso carver Jan van Steffeswert who worked in the 15th and 16th Centuries. The top two floors of the gallery are devoted to modern and contemporary art, and contain nothing but a bewildering parade of grotesque horrors. My advice is to flee from them swiftly. The first floor is where there discerning visitor’s energies should be focused, for there is to be found there a glittering collection of wonderful Medieval treasures.

Maastricht counts many great clerics amongst its former inhabitants – not least the 18th Century academic Jean-Pierre Minckelers. He was a deacon who devoted his entire life to chemical engineering and research. Amongst other things, he invented coal gas, and there is a splendid statue of him in the main square standing in a cassock, holding a permanently lit flame thrower which spews out fire. It is a remarkable and heartening sight – no inhabitant of Maastricht could gaze on it and believe the tired fable that science and religion are enemies.

I was also able to visit the extrordinary shrine of St Gerlach. He was a local 12th century hermit who lived in an oak tree. When he died, locals took dirt and sand from his grave to their sick animals, who were miraculously cured. Even to this day, his tomb is designed in such a way that a large pile of consecrated sand it left under it, and pilgrims can scoop out sand with a specially designed silver spoon, to take home with them as a sign of St Gerlach’s protection and prayers. It is said some people eat the sand; others place it in locations that need God’s blessing.  I had the privilege of bringing some holy sand back with me to Margaret Street as a sign of St Gerlach’s prayers. Perhaps we might sprinkle some of it over the plants of our church garden – I don’t think I shall be eating it any time soon!

It was a joy to learn about the ancient Christian culture of this fascinating area, a place I had virtually no knowledge of before. What an encouragement it is to us in our Christian pilgrimage through life to reflect on the rich cultures of earlier Christian ages. 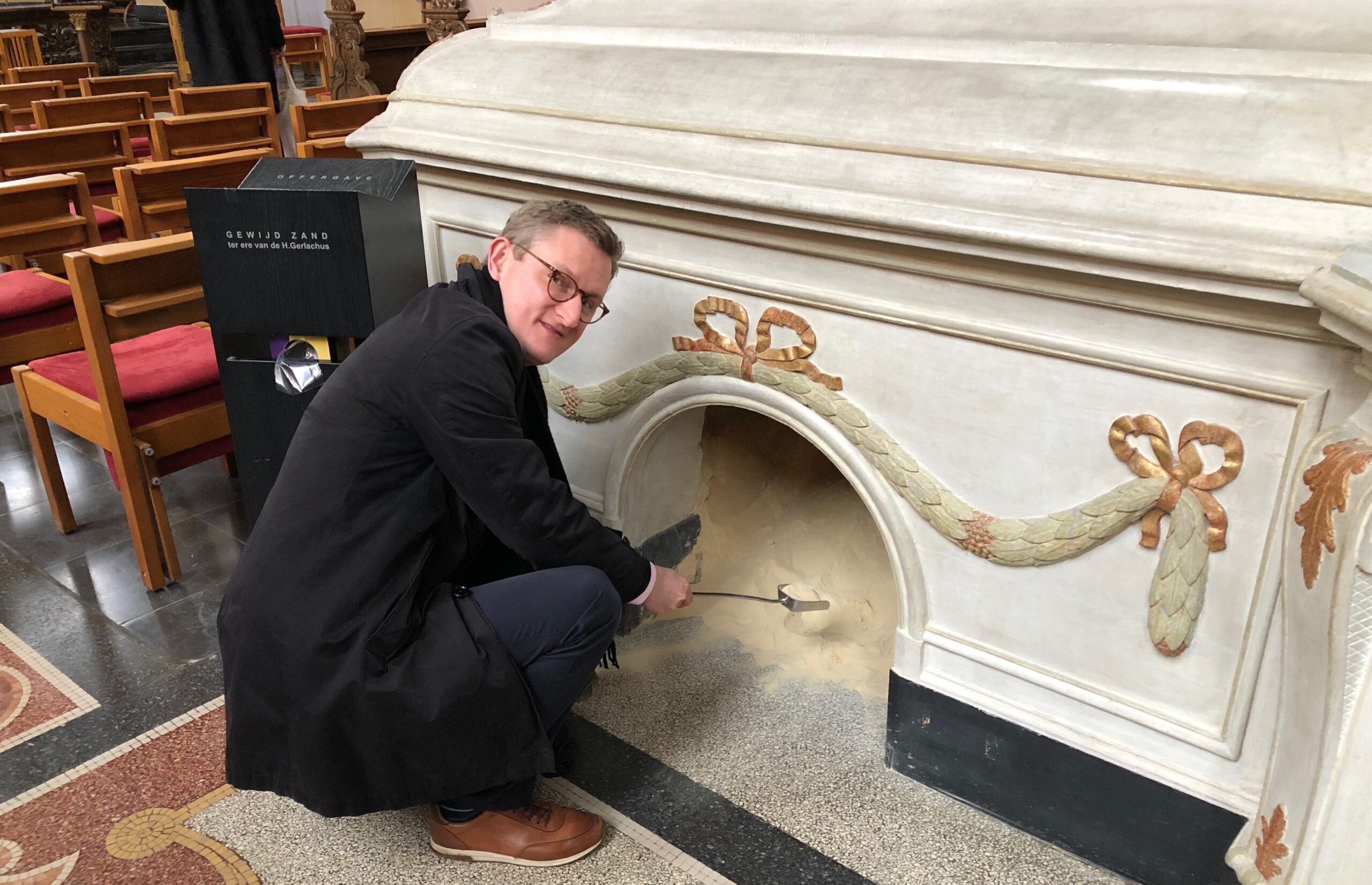 Fr Peter scoops out holy sand from the tomb of St Gerlach.

Donations to this year’s Festival Appeal will be shared between three charities.

The Soup Kitchen is a resource for the homeless, elderly, lonely and vulnerable in London. They provide free meals, clothing, toiletries and a sense of belonging to nearly 150 people each day and an on-site mental health drop-in centre to help address their guests’ mental health needs.

The London Churches Refugee Fund enables churches and individuals to donate to multiple charities helping destitute refugees and asylum seekers in London. From your donations we make grants to front-line projects, typically for phone credit, hygiene items, food or fares to access drop-ins, language classes, solicitors, etc. To date, the LCRF has raised and distributed over £250,000.

Donations may be made online at cafdonate.cafonline.org/21806, or by sending a cheque to the Parish Office, payable to Parochial Church All Saints and marked Festival Appeal 2022. 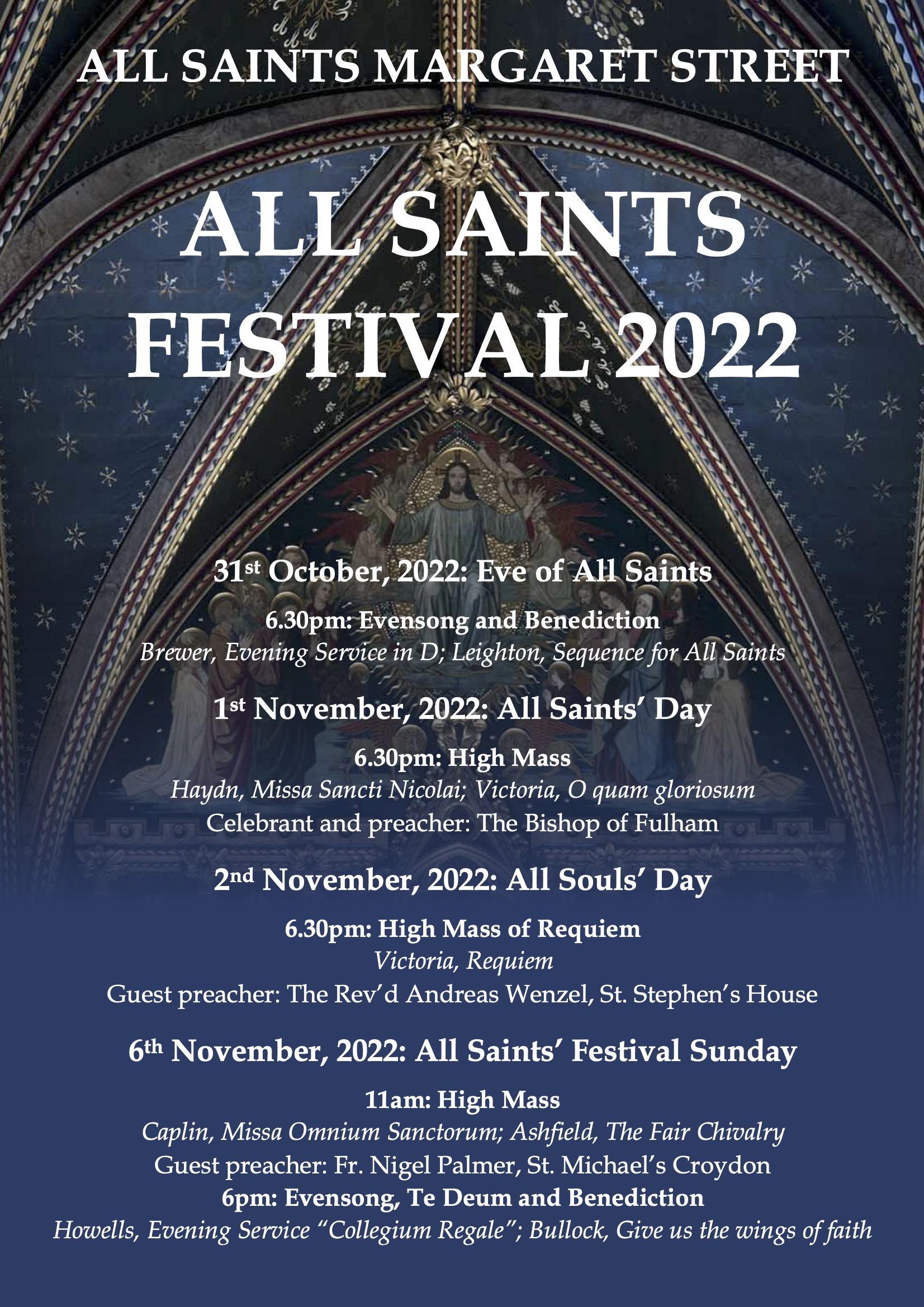 The monograph is essentially the fruit of Fr Peter’s doctoral thesis. He explored how visionary elements in Luke’s Gospel had a particular influence on early interpretation of the Transfiguration, by examining the rich hermeneutical traditions that emerged – particularly in the Latin West – as the Transfiguration was first depicted visually in art.

If you want to know more about this topic, Fr Peter will draw on a lot of this material at our autumn study day on Thursday 20th October. 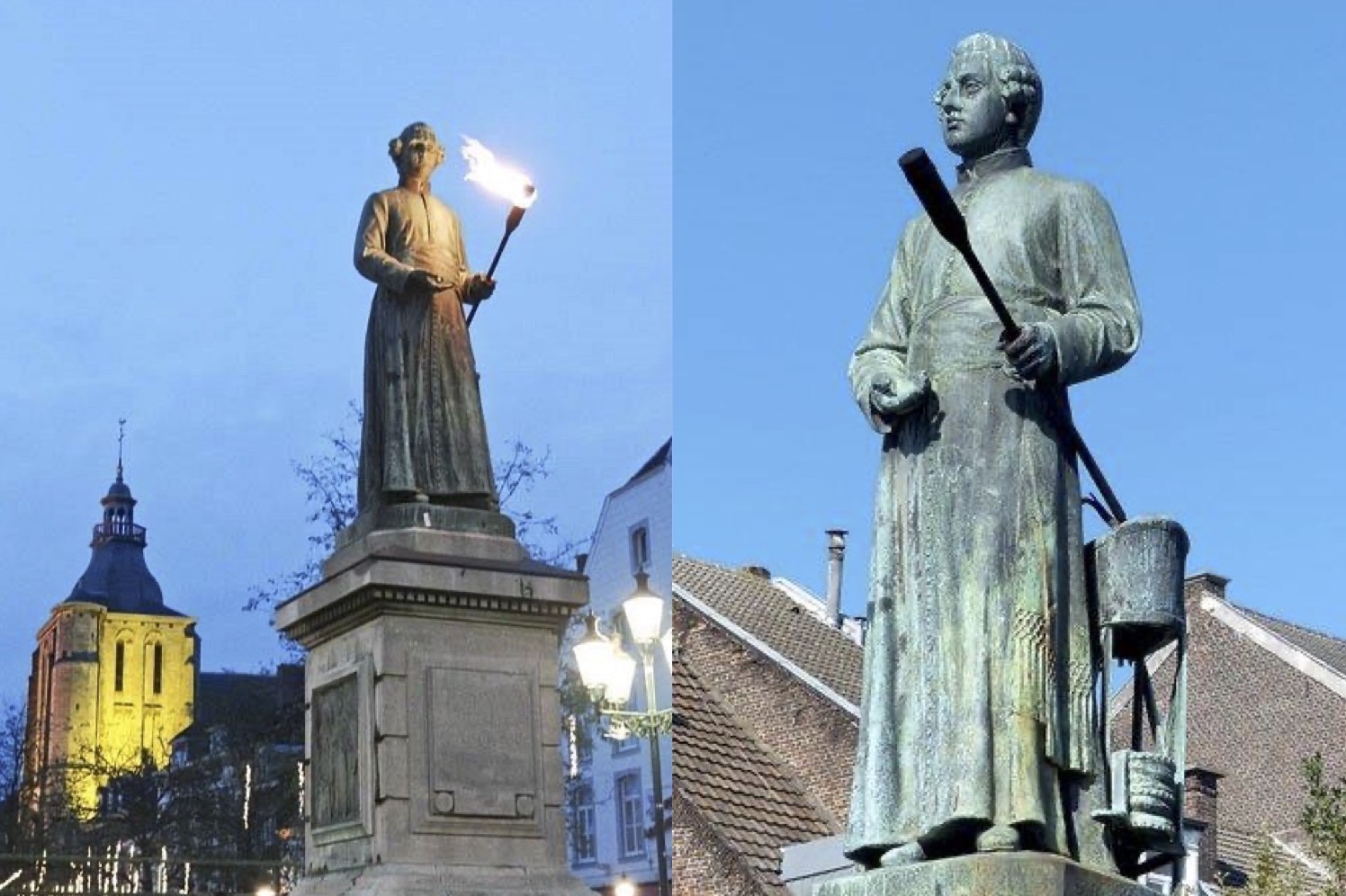 The splendid statue of Fr Minckelers in the main square of Maastricht with fully working flame thrower.

The following visits to Walsingham are now available to book through our parish office over the next 12 months.

National Pilgrimage to the Shrine of Our Lady of Walsingham
Monday 29th May 2023
The cost is usually around £20. Details will be announced closer to the time.

Annual parish weekend pilgrimage to Walsingham
Friday 21st July to Monday 24th July 2023
Cost: £270 Friday to Monday; or £190 Friday to Sunday evening (including full board plus mini-coach from Kings Lynn – pilgrims need to book their own train ticket to Kings Lynn).

The links for the livestream and service sheet for this Sunday’s High Mass are at the end of this email.

Evensong and Benediction is at 6pm on Sunday. The music includes Wood’s Evening Service in D and Parry’s Never weather-beaten sail. 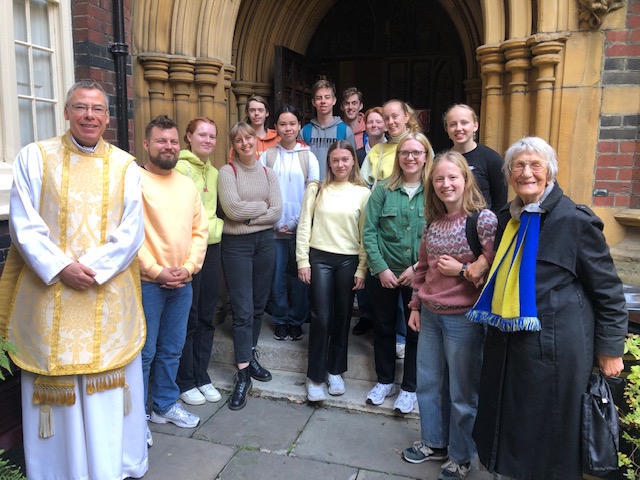 It was a great joy and pleasure to welcome a party from the Lutheran church in Sandnes, Norway, to our lunchtime Mass on Thursday. Here there are pictured here with Fr. Matthew Duckett, the celebrant. We hope they visit again!

A concert in aid of the Ukrainian Welcome Centre will be given by the London Chorus and the Ealing Symphony Orchestra at the Ukrainian Catholic Cathedral on Duke Street on Thursday 20th October at 8pm. It will include Vaughn Williams’ Dona Nobis Pacem along with works by Coates, Lehar, Dvorak and Mussorsky. 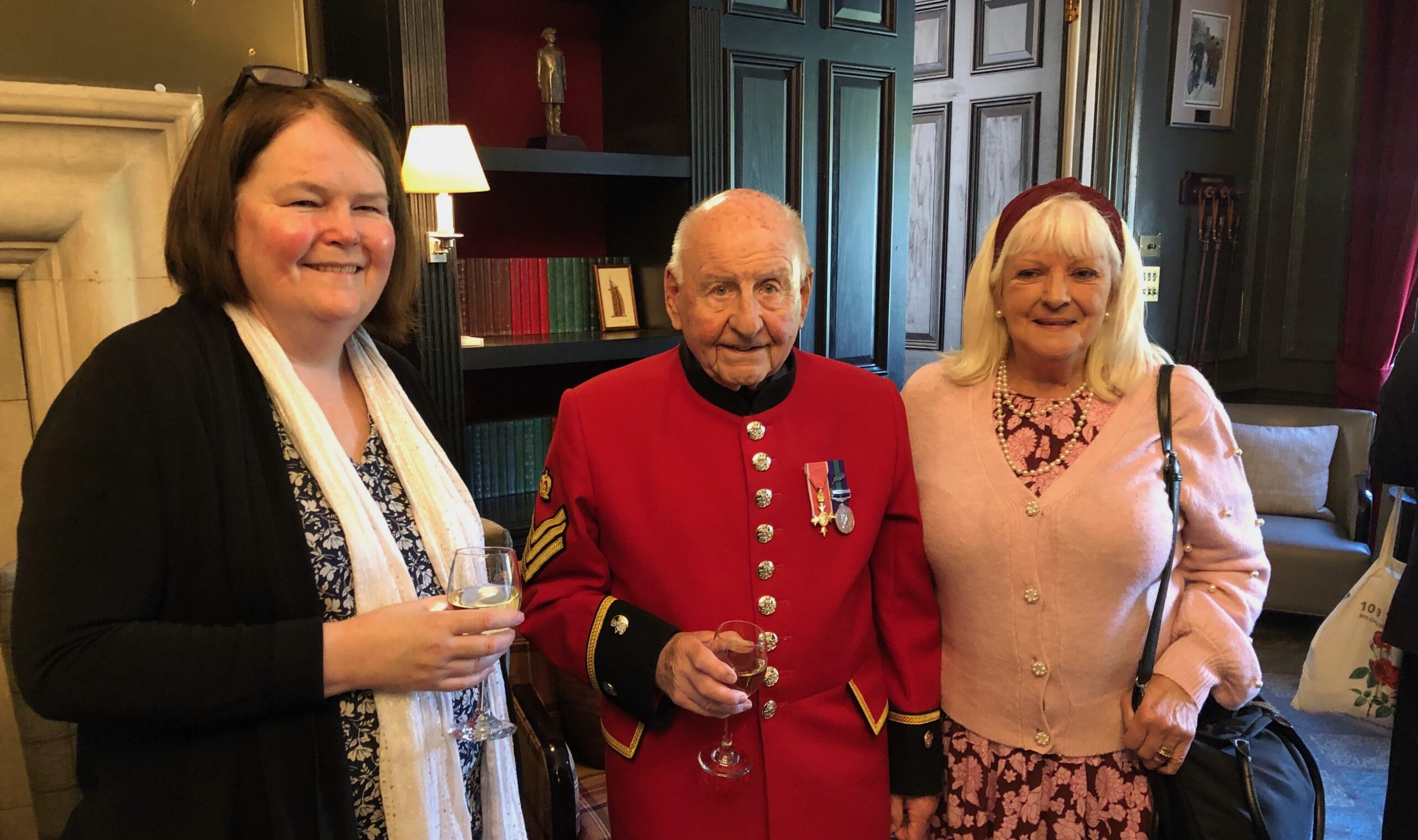 We were very grateful for the aperitif we were offered at the end of our tour of the Royal Hospital Chelsea in the Pensioners’ Club. It was such fun to chat with the Pensioners who welcomed us.