Home > Music at All Saints > The Organ

All Saints’ organ is a superb four-manual Harrison and Harrison instrument with 66 speaking stops, built in 1910 to a specification drawn up by Walter Vale. It retains the best of the pipe work of its predecessor, the original and considerably smaller Hill organ. Though as big as those found in most cathedrals, it is perfectly tailored to All Saints’ smaller dimensions – powerful, but not excessively so, sounding intimate when played quietly, and monumental when loud. Harrison rebuilt it in 1957, replacing the tubular pneumatic action with electro-pneumatic. Electrical blowers replaced the hydraulic blowing plant.

The tonal changes made to 10 stops in 1957 – like those made to many other organs at that time – altered the tone of the instrument, to a very limited extent, to a more ‘classical’ sound. Therefore, when the organ next required major restoration work, the decision was taken to try to restore the sound nearer to that of 1910: to return it to an ‘Edwardian Romantic’ organ. The completed restoration was celebrated with two inauguration concerts in March 2003. 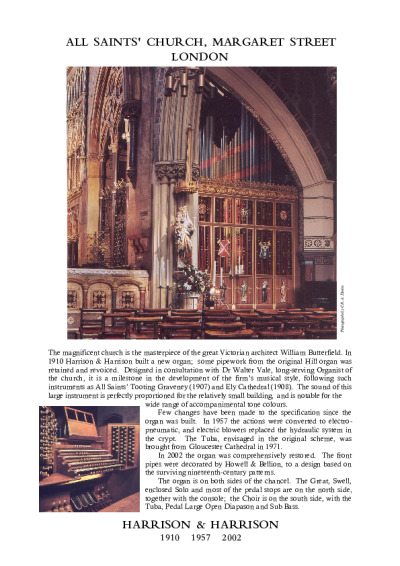