“I’ll tell you why Mary can’t save you – because she’s not God.”

Those are words I heard the other day as I was making my way across Oxford Circus. A slightly unhinged street evangelist was shouting through a megaphone into the crowd. He was very concerned with the dangers of what he described as Mariolatry.

One of the most intriguing characteristics of living in the West End I have discovered is listening to the protestors, street preachers, and vaccine cranks who regularly congregate at Oxford Circus to shout at people through their megaphones. The preaching is almost without exception an extraordinary parade of error, superstition, delusion and conspiracy theory that in my experience at least bears little resemblance to the Christian religion.

But the fellow I was listening to the other day was in full flood making a series of assertions about Our Lady’s role in the history of salvation.

What I suspect that preacher didn’t realise is this. He had unwittingly explained with remarkable concision the theological mystery which does in fact lie at the heart of today’s feast. For I hope none of us here believes Mary can save us. She is indeed not God. That’s the point. She was saved by her son as a sign to us of what we too can hope for.

The Assumption celebrates the fact that our ultimate hope is the life of heaven. Mary’s vocation was so special and so unique that her son would not allow her to taste death. At the end of her earthly life she was taken body and soul to heaven to be re-united with him there, where she continues to pray for us.

But for as unique and special as her vocation was, she was no less human than you or me, and was still saved by her son’s death and resurrection. She experiences his resurrection life before we do as a foretaste and exemplar of what we hope for.

But as I listened to the street preacher get more and more worked up the other day, another thought came into my mind. What good does all this shouting do? Has it ever convinced a single person that God loves them? In fact does it put off more people than it convinces?

And that led to another thought: if we go on a procession around Oxford Circus this evening, what distinguishes us from him? Are we not in danger of becoming just another religious spectacle that simply annoys people and puts them off the idea of organised religion? What can we do to ensure that our witness tonight is more effective at showing people the love of God?

I think one of the key issues is this. The street preachers of Oxford Circus see their goal as convincing people of an idea. It’s about aggressively changing someone’s mind through argument, which frankly rarely works.

But our procession tonight I hope is not about persuading people of an idea, or arguing with anyone, but rather showing what being a Christian is like. For as we make our way through the streets of the West End, we will be worshipping.

We will be showing what it looks like to so believe and trust in God, that it is our hearts’ greatest desire to praise him. And as our procession of worship goes along, Christ will be at the heart of it, in an image cradled on Mary’s knee. Our procession tonight will be, if you like, a visual metaphor for the whole of the Christian life. For the Christian vocation is a journey through life with others, in Christ’s company to God our Father.

And if we are joyful, and happy and full of Christ’s love as we process through our city, others will want to be like that too. They will want to explore themselves what it is that gives us that joy and confidence. And they will know that there exists here at All Saints’ a community that will help them do that and deepen their relationship with God.

My prayer is that through our celebration of the Assumption tonight, we reveal to the world what being a Christian is like rather than shouting at them through a megaphone about what it is not. And one of the most important things being a Christian is about is making our way through life to God in the company of all those fellow Christians who have also found their hope in Christ. And the first amongst those fellow Christians is Our Lady – the one chosen by God to be mother of his son, and our mother too, and who today is assumed in glory into heaven as a foretaste of what we can hope for too. 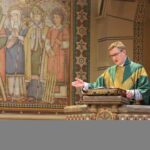