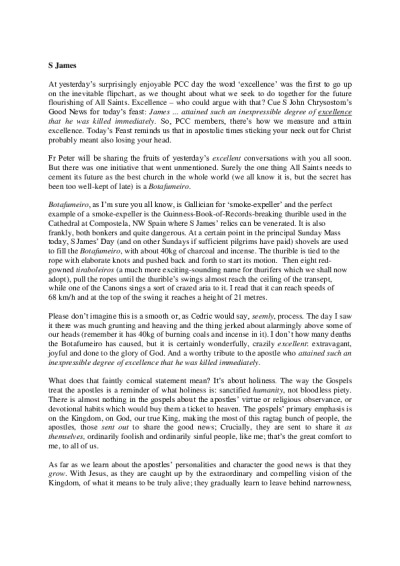 At yesterday’s surprisingly enjoyable PCC day the word ‘excellence’ was the first to go up on the inevitable flipchart, as we thought about what we seek to do together for the future flourishing of All Saints. Excellence – who could argue with that? Cue S John Chrysostom’s Good News for today’s feast: “James … attained such an inexpressible degree of excellence that he was killed immediately.” So, PCC members, there’s how we measure and attain excellence. Today’s Feast reminds us that in apostolic times sticking your neck out for Christ probably meant also losing your head.

Fr Peter will be sharing the fruits of yesterday’s excellent conversations with you all soon. But there was one initiative that went unmentioned. Surely the one thing All Saints needs to cement its future as the best church in the whole world (we all know it is, but the secret has been too well-kept of late) is a Botafumeiro.

Botafumeiro, as I’m sure you all know, is Gallician for ‘smoke-expeller’ and the perfect example of a smoke-expeller is the Guinness-Book-of-Records-breaking thurible used in the Cathedral at Compostela, NW Spain where S James’ relics can be venerated. It is also frankly, both bonkers and quite dangerous. At a certain point in the principal Sunday Mass today, S James’ Day (and on other Sundays if sufficient pilgrims have paid) shovels are used to fill the Botafumeiro, with about 40kg of charcoal and incense. The thurible is tied to the rope with elaborate knots and pushed back and forth to start its motion. Then eight red-gowned tiraboleiros (a much more exciting-sounding name for thurifers which we shall now adopt), pull the ropes until the thurible’s swings almost reach the ceiling of the transept, while one of the Canons sings a sort of crazed aria to it. I read that it can reach speeds of 68 km/h and at the top of the swing it reaches a height of 21 metres.

Please don’t imagine this is a smooth or, as Cedric would say, seemly, process. The day I saw it there was much grunting and heaving and the thing jerked about alarmingly above some of our heads (remember it has 40kg of burning coals and incense in it). I don’t how many deaths the Botafumeiro has caused, but it is certainly wonderfully, crazily excellent: extravagant, joyful and done to the glory of God. And a worthy tribute to the apostle who attained such an inexpressible degree of excellence that he was killed immediately.

What does that faintly comical statement mean? It’s about holiness. The way the Gospels treat the apostles is a reminder of what holiness is: sanctified humanity, not bloodless piety. There is almost nothing in the gospels about the apostles’ virtue or religious observance, or devotional habits which would buy them a ticket to heaven. The gospels’ primary emphasis is on the Kingdom, on God, our true King, making the most of this ragtag bunch of people, the apostles, those sent out to share the good news; Crucially, they are sent to share it as themselves, ordinarily foolish and ordinarily sinful people, like me; that’s the great comfort to me, to all of us.

As far as we learn about the apostles’ personalities and character the good news is that they grow. With Jesus, as they are caught up by the extraordinary and compelling vision of the Kingdom, of what it means to be truly alive; they gradually learn to leave behind narrowness, pettiness, meanness and fickleness, at least for long enough to share Our Lord’s world-challenging message.

The naïve jockeying for the best places in the Kingdom by James and John (their pushy mother is added by Matthew to make them less culpable) should not be judged too harshly. Like you, I trust, their passion for the gospel was not in question; once you’d caught the vision, why wouldn’t you want a front-row seat. It’s just that they were human. James and John’s request to sit in places of honour in heaven is little more than daft: they’ve heard the Resurrection bit, but not the Good Friday bit. A front-row seat in Compostela would certainly put you in danger of death from what I saw.

Paul riffs on that in today’s second reading: For while we live, we are always being given up to death for Jesus’ sake, so that the life of Jesus may be made visible in our mortal flesh. In the story of James and his equally impetuous brother it’s the misunderstanding, not the suffering, which we are encouraged to notice and understand.

James and John are passionate; we know elsewhere that they were nicknamed Boanerges, the ‘sons of thunder’ (Mark 3:17); they were all about action; calling down fire from heaven on people who got in the way. Their preposterous misunderstanding of their journey with Jesus was about over-eagerness to act, not about putting up with things. The ‘putting-up-with’ is God’s part, the gracious part, God’s patience, suffering in that Latinate sense; we do all have to learn that. But we first need passion and joy; they are the yeast which God mixes with our misunderstandings and lumpen clumsinesses to produce the beauty of eternal life, life which includes as many of his children as he can gather in. For “we have this treasure in clay jars, so that it may be made clear that this extraordinary power belongs to God and does not come from us” (Paul, again).

There are messages in today’s Feast about sacrifice, and important words for the Church about keeping perspective in our internal arguments and power plays and status-seeking, while the world looks on with indifference. We need fewer, not myriad, strategies and much more passion and joy, in good parish churches. God can translate our enthusiastic mistakes into the grammar of eternal life much more easily than he can our agonised, self-inflicted burdens. And he can do that with other people who are completely different from us as well. Passion and joy transformed by grace is something to which we can all aspire and then share.

There are risks attached to passion for the gospel as James discovered. But mistakes only matter if we don’t admit them and correct ourselves and life without risk is mere existence. Giving, grace, the cross itself is risk, God’s risk for us. The Lord loves a cheerful giver because that is his nature, and he wants us to know him and become like him. If we try passionately and joyfully to seek him ourselves (though we may secretly hope not to attain such a degree of excellence that we’ll be killed immediately), we will carry others, with us, to God